I called to talk to Latin Grammy Winner Lucky Diaz about his latest CD and tour and ended up talking about lots of other stuff.  I caught up with the bilingual star while he, wife Alisha and child were taking a break in Columbus, Indiana visiting Alishas family. They’re in the middle of a national tour and what better place to catch a breather than the heartland  of our country. It’s only a short rest because they arrive in the Chicago area tomorrow Friday, June 20th, performing  at two Land of Nod stores.  One in Oak Brook (11am) and one in Chicago(4pm)  in support of their last two CD releases –  Lishy Lou and Lucky Too 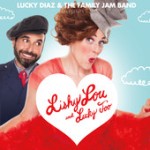 (October 2013) and their new release Aqui Alla.  I highly recommend seeing them as they are highly energetic and interactive. It’ll be fun for the whole family…  Now that business is out-of-the-way let’s get to the fun stuff. I first met Lucky and Alisha at the last Kindiefest (a moment of silence).  We had a brief conversation after their great set.  This time Lucky and I got to speak a 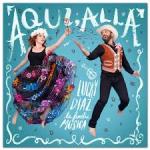 bit longer.  Any conversation that flows from Credence Clearwater Revival (with John Fogherty) to Stevie Ray Vaughn to Los Lobos to Fleetwood Mac with mentions of Sound City and used guitar shops is great conversation in my book.   How awesome is it that the Legenday Flaco Jimenez plays on the opening track of Aqui Alla (Flaco absolutely kills it)!  That Lucky records most of his stuff live and on 2” tape (watch Sound City) keeping overdubs to a minimum!  It very cool is what it is. Very cool indeed!   But the coolest thing of talking to Mr. Diaz is his appreciation of where his music has come from. Mentions of Chuck Berry, Richie Valens, Chicano Rock, traditional blues and The Mavericks just to name a few he mentioned.   That he takes the time to talk to a fellow kindie artist/ blogger and spends most of the interview talking about how others have helped and inspired him. From  producers to musicians to the girl who inspired the song Firefighter Girl (we like firefighter songs around here) Lucky is a man thankful for where he is and those who helped. If you have an opportunity go catch a show near you.  Lucky Diaz and the Family Band are worth the trip.  Go by their CD and support a kindie artist today! 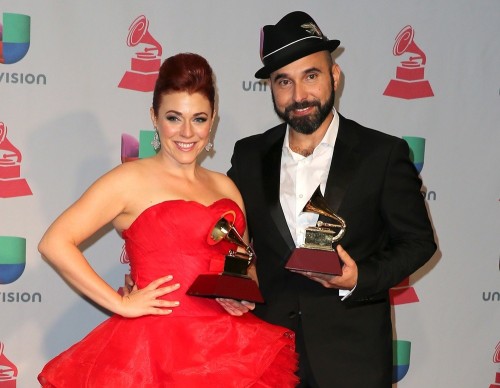 The CD’s were provided by the artist to this blogger.  The opinions expressed here are his own

Comments Off on Lucky Diaz talks a little music.