Unexpected Sonic Joy in the Car. Hello My Baby by Vered

Posted on June 4, 2016 | Comments Off on Unexpected Sonic Joy in the Car. Hello My Baby by Vered

Getting in my car this morning after a long work shift my plan was to stop at the farmers market for some freshly made donuts and grab some vegetables. Opening the tailgate I placed my duffel bag in and noticed a box of my CD’s. What caught my eye was a couple other CD’s in the box one of which is Hello My Baby : Songs to Bond You and Your Baby by Vered.  Always willing to hear new artists and especially people I’ve met I pop in into the CD player.  The title is a bit wordy in my opinion but that would be the only flaw in an otherwise perfect sonic journey. The blend of harmonies, horns, strings and joy make it one of the best sounding CD’s I have heard this year.  I haven’t written here since pre-kindiecomm and that’s where I obtained this CD.  I saw and heard lots of great stuff at Kindiecomm. Lucy Kalantari, LARD Dog, The Sugar Free Allstars, The Boogers and may others to which I have been slacking about reporting here on the blog.  But  I gotta tell you that upon hearing this CD I felt obligated to write about it. To spread the word.  The shame of great albums like this is that many folks dismiss what’s been recorded as soon as they hear kids or children’s music. This isn’t a sing song sing along hope to forget it barney experience.  This is excellence in music regardless of genre. Do yourself a favor if your looking for something to listen with your baby, child or just in the mood for some great music. I should mention that once again that guy Dean Jones (Grammy award winner)produced this stellar album. Go buy this and support an independent artist today.

Comments Off on Unexpected Sonic Joy in the Car. Hello My Baby by Vered 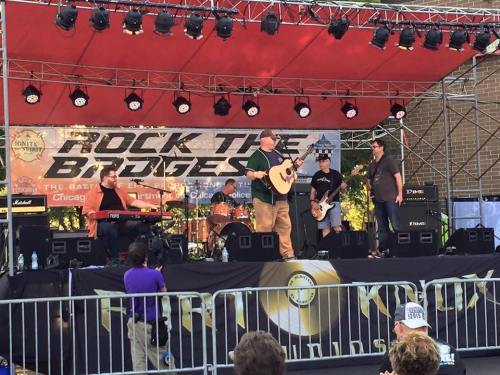 Hey there folks who peruse this page. It’s been quiet for quite awhile.  I lost the passion for writing about music. I lost the passion for booking shows.  I still love getting out there and performing.  So this year when the annual application to the Kindiecomm Showcase was due I figured why not. I fully expected not to be chosen again. Here’s the thing.  IT’S NOT PERSONAL. The people who book shows  WANT to put on the best show possible. They NEED to attract an audience to justify paying you and keeping the lights on. I have seen Brady Rymer and The Not-Its play to 50 people at Jiggle Jam (which is now defunct) and it was THE BEST FAMILY MUSIC FESTIVAL of all time. By the way both acts absolutely CRUSHED it. Doesn’t matter the size of the audience. Play each show as it was going to be your last.  So what the point of all this… We got the call to play the Kindiecomm Showcase! We will be closing the show Saturday night! Persistence pays off with a huge dose of patience.Don’t confuse persistence with pestering. There is a very definitive line.  Keep performing, keep writing and keep getting better.  I’m gonna be writing here again weekly visiting new bands and talking about new Poochamungas recordings. So stop on by and let’s see what the rest of 2016 has to offer. We have some pretty cool stuff happening up ahead.

Comments Off on Kiindiecomm is COMING!!!

Something caught my ear. Future Hits

Posted on April 14, 2015 | Comments Off on Something caught my ear. Future Hits

It’s funny when life comes full circle.  Last year the first time I heard of a band called Future Hits is when they were co-billing with Little Miss Ann at the Hideout.  I was unable to attend that show and around that same time I found out that there was a music teacher in my kids school teaching songwriting. Imagine my surprise when I found out they were in fact the same person.  Matt Baron.  I discovered this at my kids school when they were hosting a parents night.  We had a nice conversation about the school, networking and music in general. I then ran into Matt again at KindieComm which was a great time (Thanks again Kathy and Robert!). There I acquired a copy of the new CD Today is Forever which is really quite good, bilingual and like nothing else in the kindie world. I would describe it as Bryn Ferry meets The Cure with hints of Elvis Costello. It’s full of moods and pianos and heavy drum beats and bass with electric guitars twanging about. It’s a whole lot of rocking fun.  Then all the songs repeat in Spanish.  So not only do the kids get super cool songs they get a bilingual experience as well.  We tend to play either the English half or the Spanish Half. That’s up to you. Future Hits has a album you should get. Go buy this CD and support an independent artist today!

Comments Off on Something caught my ear. Future Hits

Posted on April 4, 2015 | Comments Off on KindieComm: Mission Accomplished.

It’s taken awhile but here I am to report on my success of completing my list (Things to do at Kindiecomm) at KindieComm in Philadelphia.  YES! I did share a

beer and a conversation with the legend herself Kathy O’Connel. Got to meet Bob McGrath from Sesame Street!!!  Shared beverages with many others including  Dean Jones and Kurt Gallagher (Both awesome and talented guys).  My family ran into the Cosgroves at breakfast, at KindieComm,  the hotel lobby and breakfast again. Good times not to mention the three girls were back-up dancers for Andrés Mauricio Salguero.  Seanster and the Monsters kicked some but on stage. Sean Hogan and the boys were great! So was Steve Denyes and Andres set as well.  Not only did I get to hang with the Jeff Bogle we got to have dinner with his amazing clan (he makes a mean pulled pork) and my son walked away with a Skylander guy! Which he is still playing with by the way…  The family

also got to see Independence Hall (They signed a few important papers here), National Constitution Center (life size bronze statues of the signers), Ben Franklin Museum (organized first fire US fire department), South Street (CHEESE-STEAK!) and Valley Forge (Them cabins were crowded).  Overall it was a great trip and my kids had a great time. I must thank the Omni Hotel in Philadelphia for the coolest perk of the trip. You can order cookies and milk to the room anytime till 9pm!!!  We even had them delivered to the lobby by the fire while sitting with Jeff Bogle. Supercool! I did fail to book a gig and only had a moment with Joanie Leeds Drummer. I leave you with a group shot of Bob McGrath, Kathy O’Connel and the attendees of com. I and the family had a great time. Hope to see you all next year.

Comments Off on KindieComm: Mission Accomplished.

Back when I had Sirius/Xm Radio.  Back before they ended my subscription without a warning or email or letter or carrier pigeon.  Back when we were loyal listeners to Kids Place Live (we still love you Mindy, Jack and Kenny). We were up to date on a lot of kids music and How to Eat a Cloud by said above band was a pretty cool song. Smart, thoughtful, quirky and fun. I had seen them perform at the last Kindiefest and they were quite good as well. So today we are going through some of the CD’s we acquired from KindieComm  (which was great! Review forthcoming) and Ratboy Jr. got the CD slot and both son and I are in agreement. It’s pretty darn good! Smart, thoughtful, quirky and fun describes the whole disk. Any CD that makes a reference to Chewbacca is a winner in our home. My son loves Pretends Your Hand’s a Puppet and Backyard Camping. It was also recorded at that fun factory in New York run by that Dean Jones guy called No Parking Studios.  I know the review is 3 years late but I just got my copy and better late than never! I look forward to their next disc.  Go find a copy of this CD and support an independent artist today!

I am headed to KindieComm. A conference of my kindie peers and I am a bit excited to meet some new people and talk to old friends. Here are 11 Things I hope to accomplish while I am in the city of Brotherly Love…

So if you’re at the conference be sure to stop by and say Hi!