Back when I had Sirius/Xm Radio.  Back before they ended my subscription without a warning or email or letter or carrier pigeon.  Back when we were loyal listeners to Kids Place Live (we still love you Mindy, Jack and Kenny). We were up to date on a lot of kids music and How to Eat a Cloud by said above band was a pretty cool song. Smart, thoughtful, quirky and fun. I had seen them perform at the last Kindiefest and they were quite good as well. So today we are going through some of the CD’s we acquired from KindieComm  (which was great! Review forthcoming) and Ratboy Jr. got the CD slot and both son and I are in agreement. It’s pretty darn good! Smart, thoughtful, quirky and fun describes the whole disk. Any CD that makes a reference to Chewbacca is a winner in our home. My son loves Pretends Your Hand’s a Puppet and Backyard Camping. It was also recorded at that fun factory in New York run by that Dean Jones guy called No Parking Studios.  I know the review is 3 years late but I just got my copy and better late than never! I look forward to their next disc.  Go find a copy of this CD and support an independent artist today!

Bill Childs got his swag bag.

After a full night the day before I awoke at 7am looking at the ceiling.  No kids, no place to be till 10am and I awake at 7am!!!  I was not happy.  So I headed down to the lobby for breakfast that is offered by the hotel.   One of the better continental breakfasts I have ever seen. Not just scrambled eggs and sausage but make your own waffles and fresh Brooklyn bagels!!! So after a low carb breakfast of eggs, sausage, a couple of potatoes and water. I headed over to the treadmill to continue working on #alittlelessfat.  While the competition is over the battle is not yet won (I have a ways to go.)   So after 25 minutes on the hamster wheel, a trip to the new man machine I was off to kindiefest.  Arriving at BAM I realized what I had left in Chicago.  My kindiefest badge.  So after registering and getting a replacement my 3rd kindiefest was officially started!  I could go into the different panels I saw and didn’t see.  Or how I missed the Lion and the Bear during showcase because I forgot my wallet back at the hotel (a very big moment of panic).  The was also the feet so sore syndrome affecting many after hours of standing, talking, walking and laughing.  But mostly I came away with two things.  One was “find your own Mississippi River.”  Molly Ledford said this in a panel referring to the Okee Dokee Brothers Grammy winning album Can you Canoe? (we loved it too!)  Stefan Shepard talks about this in his blog better than I can.  Go read it here.

The other thing that I got was MAKE GREAT MUSIC.  This was repeated during a few panels and ties in with “find your own Mississippi River.”   The music has to inspire you before it inspires others.  Which is what I imagine most of us artists try to do.  I use my kids and my childhood to write my music.  This was mentioned on a few panels.  My motto for the band has become Good Music Knows No Age.  I don’t try to write age or kids specific songs.  I try to write good songs and hope kids like them.  Since I have two kids I tend to write about things they are interested or things from my childhood they can relate to.  So I could ramble on about all the great people I got to talk too, drinks shared, empanadas eaten and weary, weary feet.  I will not.  I will thank Melissa Levis and Bridget Rymer for sharing their piece of wall with me Friday night as I sat and rested weary feet.  A very enlightened conversation.

The David Wax Museum for playing music that made me say wow during Sundays festival and the kindie community at large.  I know it goes without saying but the biggest fans of the kindie music are the artists themselves!  It is the generosity of others , their input and help and  makes it possible for me to do what I do.  So thanks to Bill. Tor, Mona and Stephanie for holding another festival.  The next post I will review some of the CD’s I garnered at the festival! 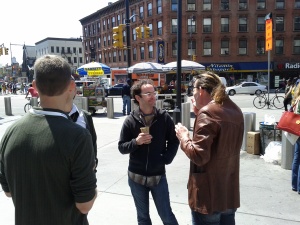 Stefan, a hidden Johnny,Jack and Ralph at the Empanadas truck for lunch.

Comments Off on Kindiefest! Days 2-4