The Chillin and Grillin for a Cure Block Party!.

I have been writing about songs I wish I had written so this time I am going to discuss some of the songs I have written and how they came to be.  The title track My Favorite Summer Day (Block Party) was a song that really took a journey for me.  Block parties are such a city specific event.  For kids it’s like Christmas in July.  We never had a block party on my street growing up but we would visit a few that friends held every year.  I think the reason we never had one on my street is there were a lot of older people on our street.  Block parties are for kids and thus if you have no kids why would you want to do all that work… But I digress.  This song started as a simple E chord, A chord strum.  Lyrically it was triggered by my own kids running around our yearly block party.  Remembering how I loved block parties and now seeing my own kids run around like I once did.  So I wrote it in first person as a story of then and now.  Then I worked out the bridge, finale  and sent it to the band so they could listen and bring their own ideas along with mine to the studio.  The other thing is the we record pretty much all our songs live with a full band.  It brings a lot of energy and spontaneity to the music. It’s what works for us.  Stevie Ray Vaughn used to do that and the Motown – Wall of Sound was all about that as well.  Some bands lay down bass and rhythm track and then layer in guitars etc.  But not us.  Piano, guitar, bass and drums all at the same time.  We do record the vocals later using a scratch track during recording and we do overdub when needed.  From the moment Alton hit the keys to open the song I was astounded.  The  piano really changed the dynamic and filled the room.  The guitar solo after instrumental middle was organic.  Instead of singing I left it open and Pete at his best just feeling the music just filled it in perfectly.    Alton’s idea was then to build it up, take it down and then build to a furious finish. Especially with the drummer.  When you listen notice how the drum part builds.   I think the song turned out pretty well with John Abbey doing a great job on the recording and mix.  But don’t take my word for it.  Have a listen using the link below and let us know what you think!http://www.poochamungas.com/#!music/c1yi7

Posted on June 4, 2013 | Comments Off on Photos and Summer Gig Schedule

Today we not only have a rehearsal we also have to take photos for the upcoming CD release.  Not my favorite thing to do but necessary to promote the materials.  I have hired a professional photographer instead of the usual DIY photos we usually use.  So today he’s gonna take pics during rehearsal and then after as well.  I hope to get some good stuff given he’s taking photos of me… But I digress.  The big day is only 3 months away and lots to do before the “Official Release.”  No worries. 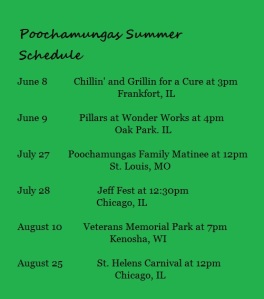 We have six great shows this summer.  Make sure you come on out and enjoy one of our live gigs.   We venture out of state a couple of times as well.  Like us on Facebook and keep up with our travels and gigs.

Comments Off on Photos and Summer Gig Schedule

My neighborhood growing up, recording and gigs coming up

Posted on July 9, 2012 | Comments Off on My neighborhood growing up, recording and gigs coming up

I have had the great fortune to grow up on a block on the northwest side of Chicago.  I’m kind of George Bailey in the fact that I always thought I’d leave but in fact still live within 2 mile from where I grew up.  I gotta say Jefferson Park in the  70′ and 80’s was a great place to be.  It’s from my childhood and that of my kids that I draw the materials for writing songs for kids and families.  But I fear the childhood I had is gone.  That the kids of today will never know the freedom we had as kids and the ability to develop problem solving and creative skills are diminishing.  When I was 7 I had the run of the whole block.  In city speak that was the 4 surrounding streets and the alley that ran down the middle.  We were told not to play by the busy street.   As I got older the boundaries expanded as did our games and number of players.   I knew and played with almost every kid on that island of wonder.  Baseball, wiffle ball, pinners, football, kick the can, catch one catch-all, capture the flag, spud, and our own dodgeball game called mush where it was everyman for himself.  I don’t ever recall a parent in our midst when we were playing.  Arguments were solved by us.  Fights were resolved by us as well.   Occasionally someone went and got a parent but that was usually because someone was bleeding or broke something.  All in all we got along pretty well.   Thankfully now, for us, there are a few kids in the neighborhood to play with.  The kids make up their own games and hopefully as they grow older that number of kids expands as do the boundaries.  That they learn to look out for each other as we did.  Mind you I’ll probably be keeping an eye out as I water the lawn or occupy a chair on the front stoop.  Probably both.

Just got done recording three songs in the studio and here are a few of the pics. 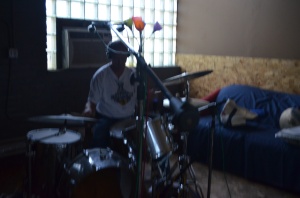 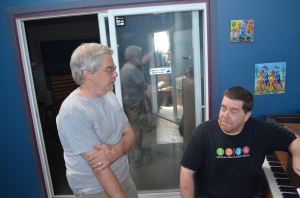 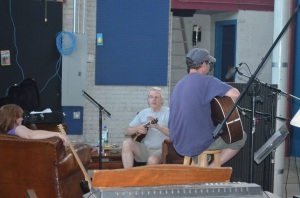 The Poochamungas play three shows in the next week so be sure to come out and see them!  July 14th Chillin and Grillin for a Cure.  July 15th Island in the City.  July 20th Skokie Public Library.

Comments Off on My neighborhood growing up, recording and gigs coming up