Posted on August 8, 2014 | Comments Off on Lollapalooza Recap of Awesome

WOW!  What a weekend and I have only just recovered.  I actually got to play at Lollapalooza! What an amazing time I had.  Playing on stage with such talented people as Ralph Covert, Little Miss Ann, Mr. Singer, Jeanie B! and of course  Laura Doherty (who put the whole thing together) was such a great experience! Thanks to Laura’s band (Rich, Andy, Mike, Rob and Cat) for making me sound so good.   Many thanks to Tor Hyams for having us perform it was really fantastic!  I also got to jam on harp with Brady Rymer.  Truly a privilege as he is one of the finest entertainers around. Plus his wife Bridgett gave me their extra artist wristband and I was able to attend Saturday and Sunday with my daughter. Win Win!!!  Oh yeah!  There were all sorts of other bands performing and I wish I had been able to see more but the whole weekend felt like you could never catch it all so just enjoy the moment. There were some great moments. 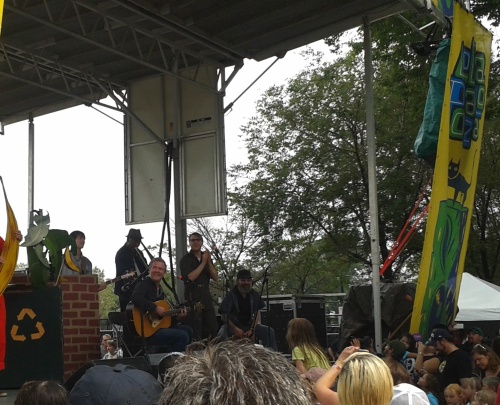 Portugal the Man, Ryan Beatty and Glen Hansard on the Kidzapalooza stage.  Short sets of really great music with the artists a mere 10 feet away.  Glen did a acoustic set with Adventure Sandwich coming on for Banana Man which was amazing.  Portugal the Man absolutely killed it and Ryan Beatty truly can sing and his two man band (electric guitar, drums) brought it.  Best stage to see an artist.  If you’re at Lolla next year visiting this stage and The The Grove are a must!

Kidzapalooza village has so much to do for the kids if you bring them.  Temporary tattoos, Drum circles, art projects, etc!  The list goes on. One of the best areas of the festival. 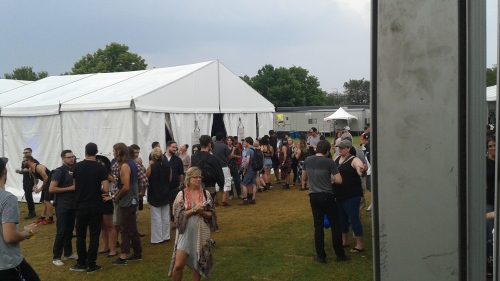 When the daughter and I were walking  in the Artist Village Saturday there was a young platinum blonde woman wearing a spandex leopard outfit.  When we went to see Grouplove later the same woman was rocking on stage with this amazing band! We are totally fans.  My daughter insists I buy some of their CD’s very soon!

The many folks I met riding on Golf carts (which is the official way to travel around for artists due to the size of the event) including a man named Rory. We had a nice conversation about where he’s from in Ireland (I have family there in County Mayo),  the guy he’s playing with named Hozier (he’s the drummer) and the fact he was flying out right after the show back to Ireland.  We caught the last 30 minutes. They were great!

Jeff Bogle of Out With The Kids is a big fan of the Avett Brothers and now I know why. Brilliant set.

Cage the Elephant rocked the schnizzle out of their set with a group of girls dancing in the mud.

Eric Schnabel recommended Benjamin Booker and that man can play guitar.  He should be careful as to where he throws guitar parts after the smashing part… Ouch!

John Wicks of Fitz and the Tantrums and his family couldn’t have been nicer. In fact so many artists, fans and staff were just plain nice.  Whether letting my daughter move up for a better view or taking a photo for us it was refreshing to see courtesy and politeness as the norm.

Rianna coming out to sing with M&M.  The audience was electrified!

Hanging for two days with my daughter at the premiere music festival in Chicago.

Many thanks to my wife who let me go for three days to listen and play music.  It was very much appreciated. Go listen and support an artist today!