The Song and the Process. Translator by Molly Ledford of Lunch Money

Posted on January 29, 2014 | Comments Off on The Song and the Process. Translator by Molly Ledford of Lunch Money 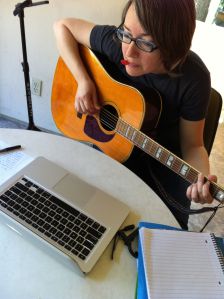 For the longest time I had been playing with a rhythm on the guitar using harmonics (see Wikipedia for explanation)and a clock like tempo.  I really loved the sound but had yet to develop a song or put words to it.  Imagine my surprise when I first heard Lunch Money’s song Translator and and it had the same rhythmic sound I had been working on (not anymore).  The rhythm perfectly matched with its lyrics conveying a bittersweet message about a small child whom no one understand but the parent who translates for the child.  Bittersweet because the child will one day grow up and not need their translator/parent.  It conveys the frustration of the child and the love of the parent at the same time.  The fact the first line of the song –You ask “where is the bathroom” and they hand you a balloon– Was taken from a supermarket incident with Molly’s

own child  makes it even more special.  So many parents can relate.  Molly says most songs come to her in bits and pieces.  She sings them into her phone (gotta love 21’st century tech) or they are lost forever.  Kind of like when you wake up from a dream and try to remember as the memory starts to fade.  Then she takes the recorded pieces and works on them later.  In this case when she awoke one morning at 8am the whole song pretty much wrote itself.  Inspiration had struck and had given her a nearly completed song. Usually there’s a lot more work involved.  Going back to the recording and working through the many ideas she has put  in their various completed states looking for a home.  She then develops the words and melodies into songs. But this time she got it all.  So she has the words and melody but has to now translate it (bit of irony) for the studio to record. Originally it’s a jolly happy song.  With the growth of the tune comes a bit of sadness.  She’s thinking of using 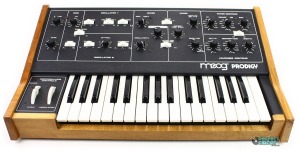 cello player Heidi Brown Carey as she has already played on the song Awake but doesn’t want the same sound. Heidi introduces plucking the cello notes in rhythmic/clock time and it’s the perfect vehicle for the lyrics.  Then her husband/engineer (they record at home) Jay lays down some atmospheric  Moog (played by Stevie Wonder and may others) in the background and they’re done. Finished.  They will later take their songs to Old House Studio in Charlotte, NC to have them mixed by Cliff Garges.  I’d say he did a fine job as the whole Spicy Kid album sounds great.  Molly has a few more projects lined up in her near future.  She’s teaming up with Billy Kelly for songs about trees. 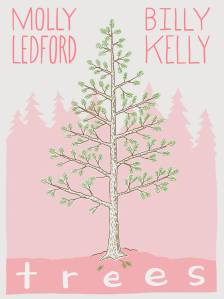 The just announced this on Facebook the other day.  She is also involved in an all girl band (non-kindie) and has been collaborating with a puppet show to write the soundtrack not to mention another CD about animals at the local shelter. Wow!  She is not one to stand still for long. Do yourself a favor and check out Lunch Money’s last release Spicy Kid and especially Translator. Written from a parents perspective it’s a high quality CD with really superior lyrics that you should give a listen too today!