Kindie vs. Kindie… Damn them (not really) School Break Primates!

Posted on September 5, 2013 | Comments Off on Kindie vs. Kindie… Damn them (not really) School Break Primates! 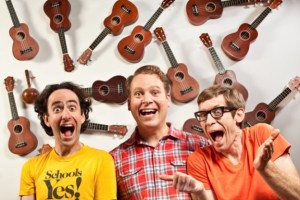 Being in a band and having produced 2 CD’s in the last 4 years gives you perspective on how much it takes to produce said product.  So when an artist releases not one but two CD’s with 15 songs on each, in the same year, you can imagine my annoyance. Damn you Recess Monkey!  Quit making (so many) CD’s ya damn dirty apes!  Yes I did just paraphrase Charlton Heston from Planet of the Apes. Yes I know that monkeys are “technically” not apes. Get off my back! (monkey-back-get it!)  There is always room for cheesiness on this blog.  But I digress…  The Kindie vs. Kindie Matchup  for today – Recess Monkey takes on itself! 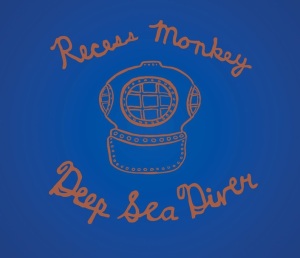 The first to be released was Deep Sea Diver.  It’s a classic pop album doing what RM does so well.  Funky bass beats, cool licks combined with humor, silliness and sharp lyrics.  The have a coming out party for new drummer Korum Bischoff on the song Fish Sticks.  It’s a primer on drum beats and the man can play.  Korum also adds some bass vocals on a couple tunes especially on family favorite song Shrimp.  Having fun with (and understanding) height issues it’s a fine song with a message (funktastic wurly playing by Johnny Bregar (the kindiependents strike again).  I must mention the song Walkie Talkies (second family fave)  has the best radio handle name ever!!  FUNKY CHEETAH.   The overachievers already have FOUR videos done for the disc.  C’MON ALREADY!  (We’re yet to make one video for the new disc.) But I digress again… It’s a good CD and you should go check it out.

Turning to Desert Island Disc  we see an expansion of the Monkey sound. 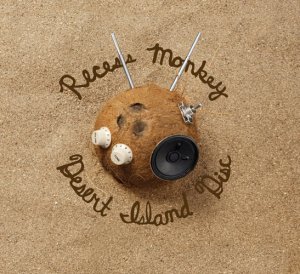 Trailblazer  reminds of one of my favorite RM songs Sack Lunch but more. The natural progression of a band that know what it wants.   Songs My Treasure, Sunburn and title track Desert Island got a whole Brian Wilson ocean vibe going on .  Desert Island not only has that add some Beatles influence.  It’s my favorite song on the disc.   Strings, woodwinds, horns and harmonies  mean that not only did they do 2 CD’s this year there was lots and time and commitment involved.  The winner is the listener once again.  So support the artist and go buy it!  Link to videos and CD sales below.

This is the disclaimer that the CD’s were sent to me for reviewing and that all opinions are our own.